Benchmarking is a relatively recent management methodology that has emerged to evaluate the weaknesses and strengths of companies, and to assess the comparative advantages of leading competitors (WOBER,2002), where a lot of managers today recognize benchmarking as a useful process to implement improvements that enhance the performance of companies, but despite its popularity, "benchmarking lacks a rigorous foundation in management science" (WOBER, 2002).

Adventure Tourism has gained wide spread attention around the world, and as ecotourism and outdoor recreation, it also has been increasingly commercialized. It includes "all types of commercial outdoor tourism and recreation with a significant element of excitement" (BUCKLEY, 2010). According to HUDSON (2003), adventure tourism brings together travel, sport and outdoor recreation, it can be considered as a subset of tourism with a component of experiential engagement that distinct it from mainstream tourism.

The literature in benchmarking recommends that tourism destinations start with internal benchmarking, then external and generic benchmarking (MCNAIR and LEIBFRIED, 1992; ZAIRI, 1992; cited in KOZAK, 2004).

In order to assess the demand component ofthe benchmarking exercise, an on-site survey to adventure travelers in Suesca was planned, asking for several issues in adventure tourism in this destination, where a comparison between this one and other national and international adventure tourism destinations was done. The main issues that are asked in the survey were taken from the Adventure Travel Development Index (ATDI), a study conducted by Xola Consulting2, the George Washington University3 and the Adventure Travel Trade Association (ATTA)4. In order to calculate an index for Suesca, only certain pillars were used, as some of them employ international indexes that are not available for a small municipality such as Suesca (table 1).

Due to time and budget issues, only the pretests were carried out: a first pilot took place in June 2011, where 19 questionnaires wereanswered, and a second pilot was carried putin July 2011, taking into account the results from the first pilot, where 21 surveys where answered. Although the sample size is not as big as to allow the performance of statistical analyses and tests, the information reported by adventure tourists is valuable nonetheless.

The instrument used to define the supply benchmarks of adventure tourism is developed by Untong et al. (2011), who suggest a conceptual framework (figure 1) and a model to assess the logistics management of tourism destinations which are related to three main aspects of performance, namely, physical flows, financial flows, and information flows (table 2). 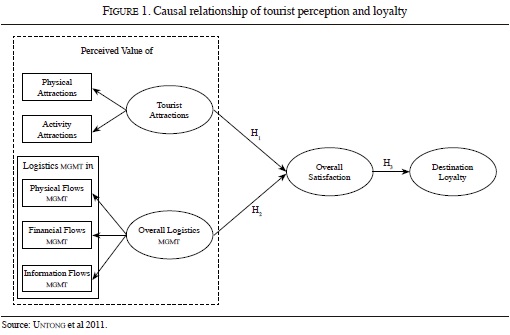 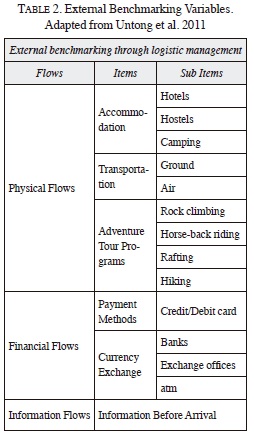 With respect to the quality of tour operators between Suesca and other national adventure tourism destinations, 47% reported that they were better, 14% the same and 14% worse. However, when asked about the level of good environmental practices adopted by Suesca's tour operators, 52% answered partially low, 28% answered fine and the remaining 19% did not answer.

In the sustainability pillar, the question regarding the level of support of the municipal government to Suesca as adventure tourism destination, 61% answered none, 33% little, and 4% didn't answer. As for the safety pillar, 33% answered that the safety management of tourists is badly handled, and other 33% answered very poorly handled.

The natural resources pillar asked adventure tourists to rate the level of environmental deterioration that Suesca's main natural attractions presented, and a list of natural sites were presented. The most recognized were the Rocks of Suesca and the Bogotá River with a 100% of answers, with a regular and a high level of deterioration respectively. 80% of respondents knew the Falcon Valley, and 76% answered that its level of deterioration was regular.

The information pillar inquired about the way tourists gather information prior to their visit to Suesca, where 76% answered through friends, family and mouth-to-mouth, and onlyone respondent said through the internet. A rock-climbing adventure guide for Suesca is available in specialized stores, both in Bogotá and Suesca. When asked if they knew this guide, 57% answered yes and 43% no. When asked for the quality of the guide to those who knew about it, 33% answered normal, 25% said very good and 16% said good. This means that this guide has reached a fair amount of adventure tourists that visit Suesca, and could be more merchandised due to the good quality reported.

Low prices are a big advantage that could be marketed in order to gain competitiveness. The availability of information for tourists prior to arriving at the destination is a major flaw, an issue that is covered in the external benchmarking.

Another result is the final questionnaire in Spanish, where issues regarding its style were fixed. A full scale survey may take this questionnaire in order to validate the preliminary results (see Annex 1).

Tables 3 and 4 present the results of the external benchmarking study.

The most important feature that gives Suesca a high degree of competitiveness is the low prices that it involves with partner destinations in the Physical Flows item, and every of its subitems, namely, accommodation, transportation and tour programs. This is a very valuable asset that can be thought of as a strength factor for international tourists, who will compare the amount of money spent in their adventure trip. Also, in the Tour Programs sub-item, the diversity of activities that an adventure tourist visiting Suesca can perform are as numerous as any of the partner destinations.

Another major gap identified was the fact that in the financial flows sub-item, no privately owned businesses accept credit or debit card, undermining Suesca's capability of attracting international tourists. Actually, only one atm is available and relatively far from the main spot where adventure tourists are gathered.

The internal benchmarking exercise, through the two pilot tests carried on-site supplied valuable information on how adventure tourists perceive Suesca as an adventure tourism destination, and provided a survey questionnaire to be implemented in the near future by Suesca's tourism authorities.

As for the external benchmarking exercise, huge gaps were found when comparing Suesca with other famous adventure tourism destinations. The most important lags appear in the financial and information flows, where Suesca sees undermined its capacity of delivering aquality experience for adventure tourists. Ahigh amount of governmental support must be given if it wants to become a highly visited adventure destination.

This study should be used as a tool by local authorities in order to create an Adventure Tourism Development Plan that takes advantages of its strengths, and also to develop Suesca as a world class adventure tourism destination. Some of the actions might be to incentivize the availability of financial services so that tourists could have more money available, which in turn would increase their consumption, and the creation of a specialized web page that concentrates all available information on adventure tourism in Suesca.

However, this study has a limited reach in the sense that only pilot tests were conducted, hindering the generalization of the information gathered, and also because direct observation of partner destinations could not be carried out. A big improvement could be achieved by visiting these destinations and carrying out a survey and direct observation and participation to obtain higher amounts of information that will be useful for improving the quality of Suesca's adventure tourism supply.

Butler, R .W. (1980). The concept of a tourist areacycle of evolution: implications for management of resources. Canadian Geographer 24(1), 5-12.

Department of National Heritage (1996). Benchmarking for Smaller Hotels: Competing with the Best. London.

Seaton, A. V. (1996). The Competitive Evaluation of Tourism Destination Performance: Scotland and European Tourism 1985-1994. Report for the Scottish Tourist Board.